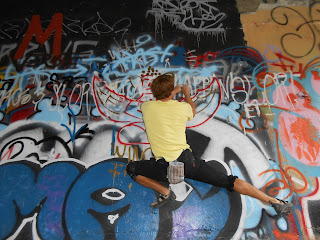 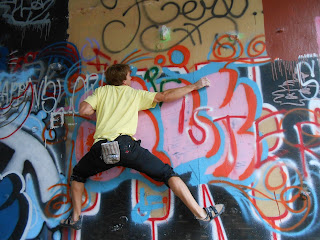 I don't think I'll ever get used to climbing on painted over rocks, but the glue-up rock traverse under a local bridge is a little like performance art. It might be going a bit far, but sometimes I think that by climbing on the rocks glued to the concrete,  one is expressing a form of art as well as interacting with art, albeit in a very transitory way.

When I first started gluing rocks up on the concrete below the bridge on McAndrew Road, there was a total absence of graffiti - just plain grey concrete. Now it is not unlike a back alley in an urban area. The funny thing is that this location is only 1/3 of a mile from the Los Padres National Forest (which stretches on and on and on . . .) yet it has a distinctly urban flavor: broken glass, various cast-offs accumulated in the stream gully, remnants of fires (from burning the cast-offs) and the artwork. It sounds pretty grim, but it is actually a beautiful spot. One side of the bridge frames a view of Nordhoff Peak through eucalyptus, while the other side looks upon the ridge above the east end of Ojai.

As far as traverses are concerned, glue-ups are a fun way to get in a lot of climbing when there isn't much rock available, or dry rock as in my case. I first became aware of the potential for glue-ups when I was a teenager and learned of the Ventura River traverses (now long gone) off of Main Street in Ventura.  When I moved to Ojai, I made an original traverse under the McAndrew Bridge, but it has undergone many variations as holds broke (the rocks are always weaker than the glue), new rocks were added and the whole thing gets painted over repeatedly. I really enjoy the training that long traverses offer and am always looking for new ones (some of my local favorites are at Stoney Point and in Malibu State Park, as well as Gunsmoke in Joshua Tree). One can tailor a training session for endurance, metabolic endurance, or incorporate it into a circuit of running, climbing, and strength training. My favorite traverses are always those that are in a natural location and on good rock, but when it rains and the only dry place outside is under a bridge, I'll happily run down to the McAndrew Grotto and do laps.
Posted by Brian Pidduck at 8:35 PM