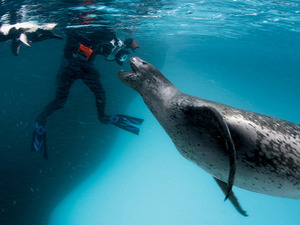 I first learned about Paul Nicklen's work in National Geographic Magazine in a series of images of a female leopard seal. The contrast of the leopard seal's teeth with the eerie blue light gave a haunting quality to what has to be one of the most incredible animal/human interactions I have every heard of, or seen documented. In a larger context, I admire Nicklen's efforts to inform people about the poles - places that few of us will ever visit, yet which play a critical role in Earth's ecological processes. You can see some of his work on NPR and hear an interview with him on NPR's photo blog The Picture Show as well as in the most recent issue of National Geographic Magazine.
Posted by Brian Pidduck at 4:53 PM